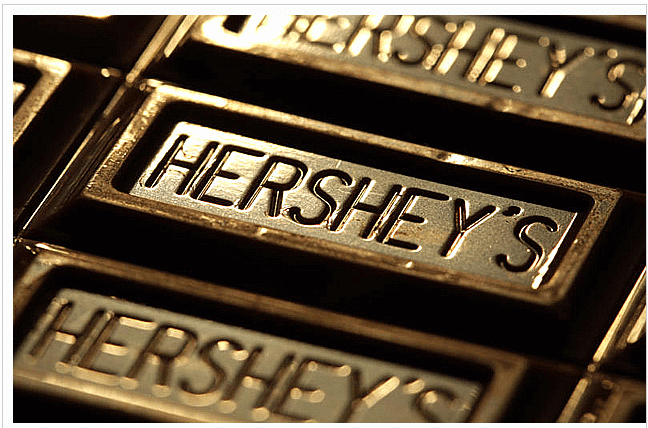 nics Show in Las Vegas. The show isn’t typically a place for food, but the idea of 3D printing on chocolate was enough to pique the interest of both foodies and technophiles alike. This new venture marks the first serious partnership between food and 3D printing.

The Sweet Side of 3d Printing

Hershey’s move to incorporate 3D printing into candy seems like a natural progression of the three dimensional printing technology. The company entered into a partnership with 3D Systems, the company said in a press release. Though chocolate will be the first food they’ll experiment with, it opens the door to giving other types of food the 3D printing treatment. There’s a very detailed process involved in order “print” chocolate in a three dimensional form. One thin layer after another must be extruded and layered on top of another, until a single sold piece comes into being. This process is completely different than the typical process of creating chocolate shape, which usually involves melted chocolate being poured into a mold. 3D printing would allow for intricate shapes to appear, all formed from chocolate.

The History of 3D Printing

The history of 3D printing is full of technological advancements and creative problem solving. 3D printing began in 1982 and the first 3D printer was created in 1984. The process of three-dimensional printing is also known as additive manufacturing and involves using additives, such as plastics, to form 3D objects of virtually any size of shape. The process of 3D printing is uniquely distinct from the traditional three dimensional sculpting technique, in which layers are removed to create an object. The three dimensional printing process allows for much more precise an intricate designs. A 3D printer is used is a wide variety of markets— from aerospace, automotive design architecture, construction, the dental profession, engineering, fashion, industrial design, the medical field and in military operations. NASA recently began testing rocket parts built by 3D printing and top medical researchers are using 3D-printed technologies to help save lives.